We have been asked to help sell these antennas 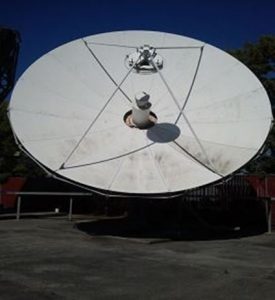 VertexRSI (GDSatcom) Earth Station Antenna 7.2m C-band, Rx/Tx, 4-port Linear Feed, 2-Axis with Motorizable Mount with AZ/EL jackscrews, Kingpost Pedestal Mount,  Hub enclosure, Aluminum panels with heat-diffusing white paint. No de-icing (the original de-icing is in poor condition and will be scrapped).
We provide:
– new motors and gearboxes
– new jacks boots
– reflector completely refurbished and checked out
Our technicians de-installed this antenna in New York City in April 2016 as part of a dismantling project. Please watch the video on YouTube: Skybrokers dismantling a Teleport in New York! Re-installation by our team is recommended to warrant the performance. Antenna comes with NEW motors and reducers.
Please ask us for more information!

System will be checked out, reconditioned to look and perform like new. We complete the antenna with documentation package and foundation plans. System is guaranteed to meet OEM specs when properly installed by our professional installation team.
This specific antenna is not available anymore but we have an identical antenna stored in Europe. It will be checked out and completely refurbushed. Please contact us for details!
VertexRSI – GDSatcom HistoryVertexRSI operated as a separate entity of General Dynamics SATCOM Technologies Division after the acquisition by Defense & Security Company General Dynamics. GD SATCOM Technologies nowadays, is a global leader in satellite and wireless communications for video, voice and data offering a wide range of products and services.
In 1973, J. Rex Vardeman and A. Don Branum founded Radio Mechanical Structures, Inc. (RMS) in Kilgore Texas that was sold in 1977 to Harris Corp. The acquisition would form Harris Satellite Communications as a division of Harris Corp. In 1984, Vardeman, Branum and other key employees purchased Harris Antenna Operations and formed Vertex Communications Corporation. This publicly–held Texas Corporation was a world leader in the design, manufacturing and installation of precision satellite communications earth station antennas.
Vertex has been named by Forbes Magazine as one of the ‘200 Best Small Companies in America’. Vardeman was responsible for much of its success and has been credited for many of the technological advances in this industry.
Before VertexRSI became part of GDSatcom in 2004, it was owned by Tripoint Global that was composed that time of RSI, Prodelin, Gabriel Electronics & Microwave and CSA Wireless Communications. TriPoint Global Communications has been integrated into the General Dynamics C4 Systems business unit of General Dynamics.
In 2015 the Company combined their C4 Systems and the AIS (Advanced Information Systems) divisions to form GD Mission Systems. GDSatcom operates as a separate unit under the GD Mission Systems Division.